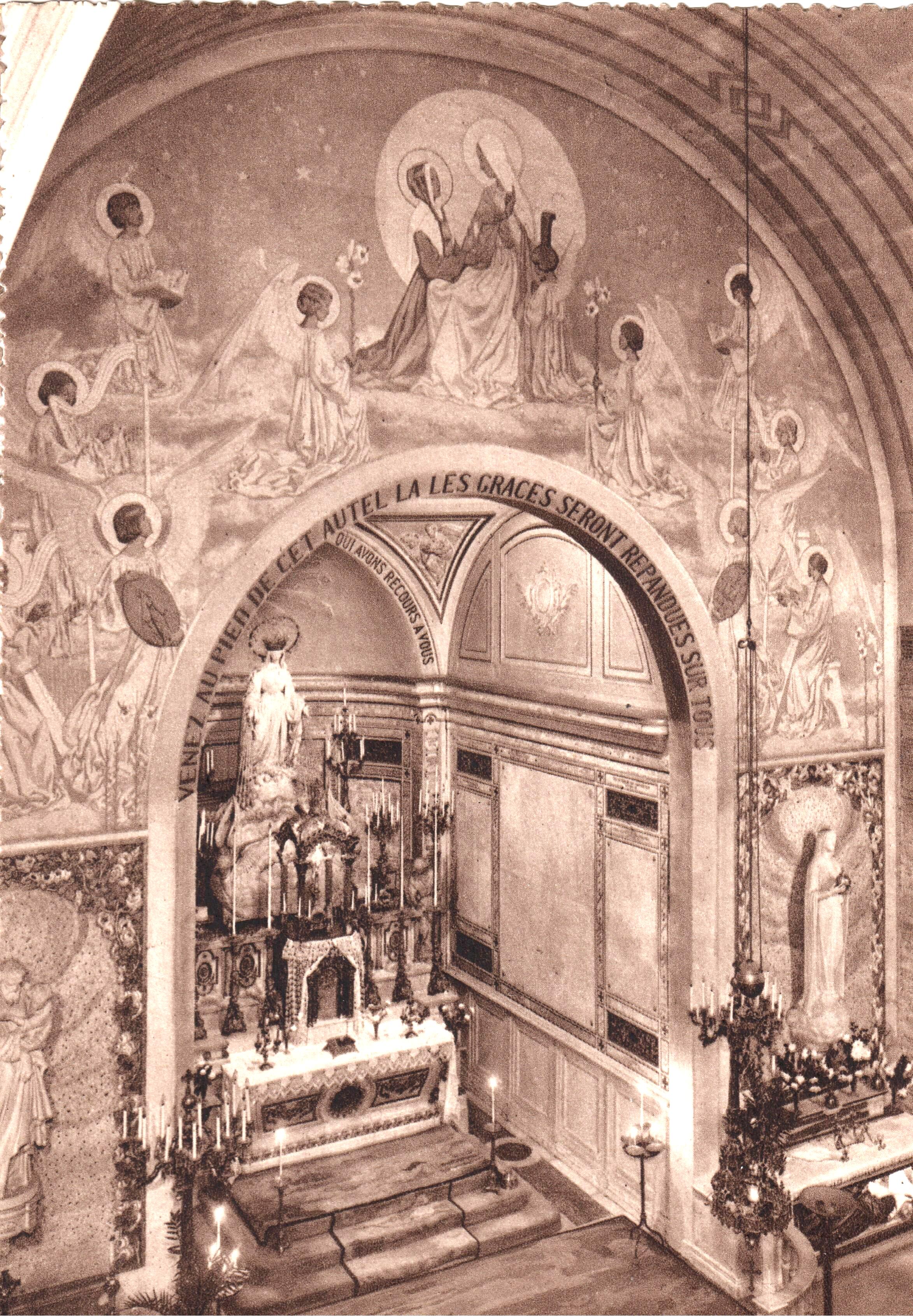 The chapel was built in 1815 and was dedicated to the Sacred Heart of Jesus. In 1830 it was privileged with the extraordinary events  of the apparitions of the Blessed Virgin to Sister Catherine Labouré that marked it forever.

Heaven came down to earth… Between July and December 1830 Sister Catherine, a young Seminary Sister (novice) of the Daughters of Charity, received the extraordinary favour of conversing with the Virgin Mary on three occasions. In the preceding months Catherine had the privilege of other apparitions. Saint Vincent de Paul showed her his heart. While at prayer in the chapel, Catherine saw, on three successive days, the heart of Saint Vincent in three different colours. The heart first appeared white, the colour of peace; then red, the colour of fire; and then black, an indication of the misfortunes that would come upon France and Paris in particular. Soon afterwards, Catherine saw Christ present in the Eucharistic host. “I saw Our Lord in the Blessed Sacrament all the time of my seminary except the times when I doubted.” On June 6, 1830, feast of the Holy Trinity, Christ appeared as a crucified King, stripped of all his adornments.

July 18, 1830, the eve of the feast of Saint Vincent whom she loved so much and whose heart she had seen overflowing with love, Catherine prayed that, through his intercession, her desire to see the Blessed Virgin would finally be fulfilled.  At eleven-thirty at night, she was called by name. A mysterious child was at the foot of her bed and asked her to get up. “The Blessed Virgin is waiting for you.” Catherine dressed and followed the child who was “bringing rays of brightness wherever he passed.” Having arrived in the chapel, St. Catherine stopped near the chair used by the priest in the sanctuary (current location of the statue of Saint Joseph).  She then heard a sound “like the rustle of a silk dress.”  Her little guide said, “Here is the Blessed Virgin.” She hesitated. But the child repeated in a stronger tone of voice, “Here is the Blessed Virgin.” In a single bound, Catherine was at the feet of the Blessed Virgin, seated on a chair and rested her hands on the knees of the Mother of God. “There, a period of time passed, the sweetest of my life.  It would be impossible for me to say what I experienced.  The Blessed Virgin told me how I should behave towards my spiritual director and also several other things.” The Blessed Virgin pointed to the altar where the tabernacle was and said, “Come to the foot of this altar.  Here, graces will be spread over all who ask for them with confidence and fervour.” A difficult mission was announced as well as a request for the establishment of a Confraternity of the Children of Mary.  Father Aladel would accomplish this request on February 2, 1840. 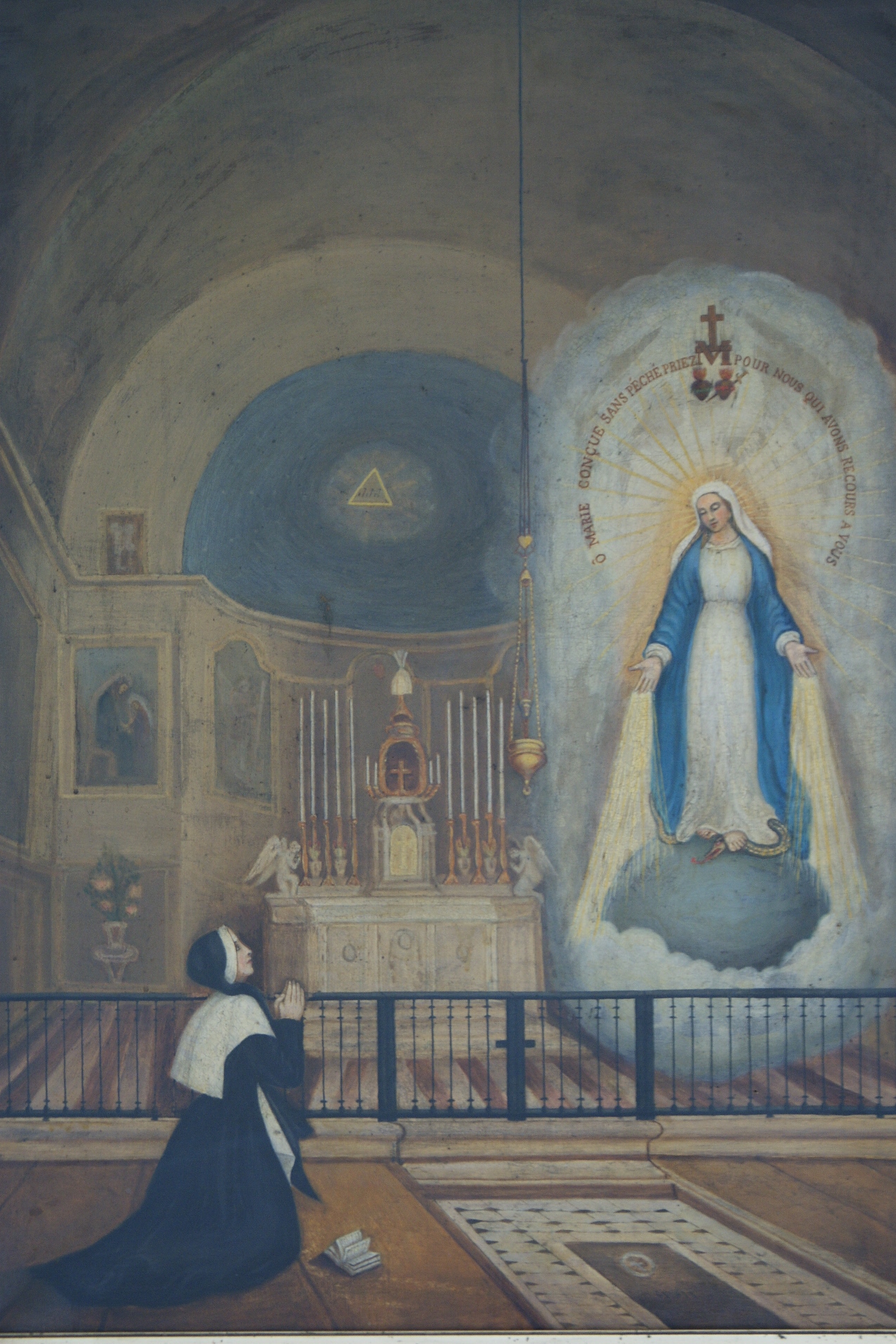 On November 27, 1830, the Blessed Virgin appeared to Catherine again in the chapel.  This time, it was at 5:30 pm, during meditation, under the painting of Saint Joseph (current location of Our Lady of the Globe).  First, Catherine saw something like two living paintings, one fading into the other, in which the Blessed Virgin stood on a half-globe, her feet crushing a serpent. In this first image, the Virgin held a small golden globe topped with a cross, which she lifted up toward heaven.  Catherine heard, “This globe represents the entire world, including France, and every person.” In the second image, beautiful rays of light stream from the Blessed Virgin’s open hands, covered with jewelled rings.  At that same moment St. Catherine heard a voice saying, “These rays are a symbol of the graces that I pour out on those who ask them of me.” Then an oval formed around the apparition, and Catherine saw in a semi-circle this invocation: “O Mary conceived without sin, pray for us who have recourse to you,” emblazoned in gold letters. She then heard a voice saying, “Have a medal made according to this model. For those who wear it with confidence, there will be abundant graces.” Finally, the image turned, and Catherine saw the reverse side of the medal: the letter M surmounted with a little cross and two hearts, one crowned with thorns and the other pierced with a sword, below.

In the month of December 1830, during meditation, Catherine again heard the rustling sound, this time behind the altar. The same image of the medal appeared near the tabernacle, slightly behind it. “These rays are the symbol of the graces that the Blessed Virgin obtains for those who ask them of her…You will not see me anymore.” This was the end of the apparitions.  Catherine communicated the requests of the Blessed Virgin to Father Aladel, her confessor.  He was not receptive to her message and forbade her to even think about it.  This was a terrible blow for her.

On January 30, 1831, Catherine finished her Seminary and received the habit of the Daughters of Charity.  The next day, she set off for the Hospice of Enghien, which had been established by the Orléans family and was located at 12 rue de Picpus on the east side of Paris, in an impoverished neighbourhood where she served elderly men and poor persons for 46 years quietly and in complete obscurity.

In this chapel, chosen by God, the Virgin Mary came in person to reveal her identity through a little object, a medal, intended for all without distinction. Mary’s identity had been the subject of controversy among theologians since the beginnings of the Church.  In 431 the Council of Ephesus proclaimed the first Marian dogma: Mary is the Mother of God. Starting in 1830, the invocation, “O Mary conceived without sin, pray for us who have recourse to you,” which rose up toward heaven, repeated thousands of times in the hearts of thousands of Christians all over the world at the request of that same Mother of God, would have an effect! On December 8, 1854, Pius IX proclaimed the dogma of the Immaculate Conception: by a singular privilege and grace granted by God, in view of the merits of Jesus Christ, the Saviour of the human race, Mary is without sin from the moment of her conception.

Four years later in 1858, the apparitions at Lourdes would confirm to Bernadette Soubirous this privilege of the Mother of God. With her immaculate heart, Mary is the first redeemed by the merits of Jesus Christ. She is light for our world. We are all, like her, destined for eternal happiness.   Some months after the apparitions, Sister Catherine was assigned to the Hospice of Enghein (in the 12th district of Paris) to care for elderly men. She set about her work; however, an interior voice kept insisting that the Medal must be struck.

Catherine spoke about it again to her confessor, Father Aladel. In February 1832 a terrible cholera epidemic broke out in Paris and would cause more than 20,000 deaths.  In June the Daughters of Charity began to distribute the first 2000 medals produced at Father Aladel’s request. Cures accumulated, as did protection from the disease and conversions.  It was overwhelming.  The people of Paris began to call the medal “miraculous”.

The words and images on the front of the medal express a message with three tightly connected aspects. “O Mary conceived without sin, pray for us who have recourse to you.” Mary’s identity is explicitly revealed to us here: the Virgin Mary is immaculate from the moment of her conception. The power behind her intercession for those who pray to her comes from this privilege derived from the merits of the Passion of her Son Jesus Christ. This is why the Virgin invites everyone to have recourse to her in the difficulties of life.
Her feet are planted on a half-sphere and crush the head of a serpent. This half-sphere is the globe.  For Jews and Christians, the serpent personifies Satan and the forces of evil. The Virgin Mary is herself engaged in a spiritual battle, the battle against evil, and the battlefield is our world.  She calls us to enter with her into God’s way of thinking, which is not the way of the world.  This is the true grace of conversion that Christians should ask of Mary so that they can in turn pass it on to the world.

Her hands are open and her fingers are adorned with rings, decorated with precious stones. These jewels emit rays of light, becoming increasingly bigger as they beam toward earth. The radiance of these beams, like the beauty of the apparition described by Catherine, calls forth, justifies and strengthens our trust in Mary’s faithfulness (the rings) towards her Creator and towards her children, in the efficacy of her intervention (the rays of grace that fall on the earth), and in the final victory (the light), since she, as the first disciple, is the first saved. 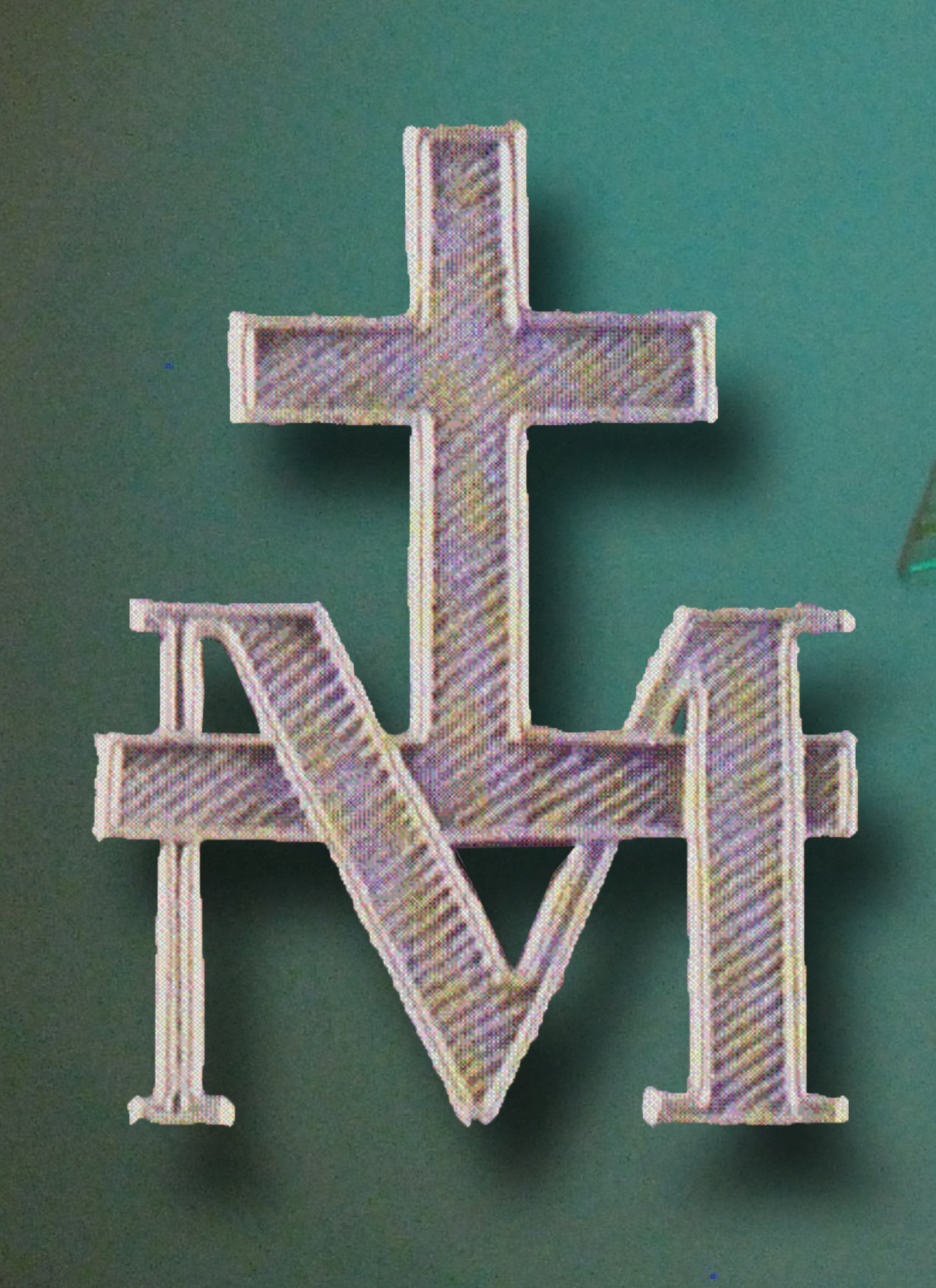 On the back of the medal, a letter and drawings introduce us to the secret of Mary. The letter “M” is surmounted by a cross. The “M” is Mary’s initial; the cross is the Cross of Christ.  The two interwoven signs show the inseparable relationship that connects Christ to his Holy Mother.  Mary is associated with the mission of human salvation through her Son Jesus and, through her compassion, participates in the very act of the redeeming sacrifice of Christ. 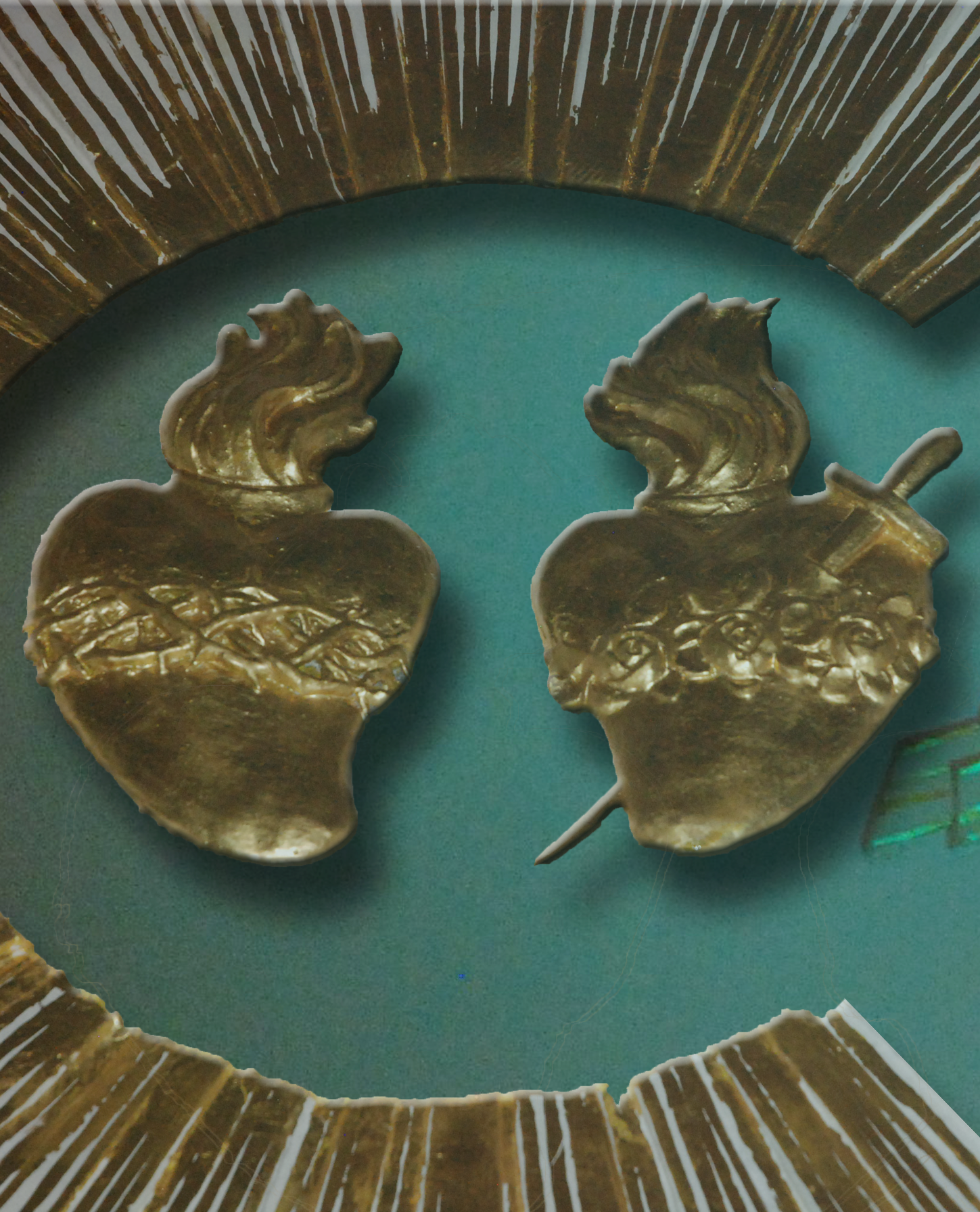 There are two hearts at the bottom, one encircled by the crown of thorns and the other pierced by a sword. The heart crowned with thorns is the Sacred Heart of Jesus.  It recalls the cruel episode of Christ’s Passion before He was put to death, as recounted in the Gospels.  It represents His passionate love for humanity. The heart pierced by a sword is the Immaculate Heart of Mary, his Mother.  It recalls Simeon’s prophecy the day Mary and Joseph presented Jesus in the temple, as recounted in the Gospel.  It represents the love of Christ that dwells within Mary and her love for us: for the sake of our Salvation she accepted the sacrifice of her own Son. Depicting these two hearts close together indicates that Mary’s life is one of intimacy with Jesus.

Twelve stars are engraved around the medal’s edge. They represent the twelve apostles and thus the Church. To belong to the Church is to love Christ and to participate in his passion for the salvation of the world. Each baptized person is invited to become a part of the mission of Christ by uniting his heart to the hearts of Jesus and Mary.
The medal appeals to our conscience so that each one of us might chose, as did Christ and Mary, the path of love even unto the total gift of self.