This new cycle of the Rosary, established by John-Paul II in his apostolic letter « The Rosary of the Virgin Mary », leads us to contemplate the mystery of Christ who is light. This dimension of him is particularly visible during the years of his public life.
The narrative of St Mark began in the desert, from where his symbol of the lion originated, and where Jesus went before entering His public life. Mark is a travelling companion of the Apostle Paul during his first journey. He lived in Rome, towards the year 70 where he was the confidant and secretary of Peter. His Gospel thus transmits the catechesis of the chief of the Apostles. It is the shortest Gospel, written in a simple, lively and picturesque way – rich in concrete details. No doubt Peter had kept one of his skills as a fisherman: his ability to observe!
Five moments of Christ’s life were chosen by John-Paul II. The Baptism in the Jordan, when we hear God’s voice proclaim Jesus as His beloved Son. In Cana, His first miracle opened the disciples’ hearts to faith through Mary’s intervention. When Jesus announces the Coming of the Kingdom of God and invites us to convert, He begins His ministry of forgiveness. During the Transfiguration, Christ shone with the glory of divinity, and God told the Apostles to listen to Him. In the Eucharist, Christ offers His body and blood as food, under the signs of bread and wine.

The Baptism of Jesus

Mark 1,11 Thou art my beloved Son, in thee I am well pleased. 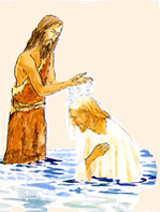 A short meditation on the event After 30 years of leading a hidden life, Jesus made an astonishing act of humility. He, the Son of God, the Word incarnate, went towards the Jordan, lost amongst the crowds of sinners who were attracted by the preaching of St John the Baptist, to receive a baptism of forgiveness. At this very moment, His Father glorified Him. What a wonderful testimony to Jesus’ divinity given by the other two members of the Trinity! The Heavens opened; the Holy Spirit came down visibly and rested on the head of the Saviour: the Father spoke and declared solemnly that this man who had lowered himself like a sinner is His « Beloved Son ». He thus gave a sort of official consecration to the mission of His Son.
With the chapel at rue du Bac The scene at the Jordan was the marvellous announcement of Christian baptism. In this chapel of the Mother House of the Daughters of Charity, St Louise de Marillac, founder of the Company along with St Vincent de Paul, enlightens us with her deep spirituality. She particularly liked St John and St Paul, and like them, marvelled at the richness of the gift received at baptism, which unites the people with their Creator and makes us children of God.
Graces for now The life of the baptised is the life of Christ within him. Let us ask for the grace to dedicate ourselves entirely to what God wants to see in us. « No longer any resistance to Jesus, act only for Jesus, think only for Jesus, live only for Jesus and one’s neighbour » said St Louise.
Clausule: … and Jesus, baptised in the Jordan, the fruit of thy womb…
Inspiration: That I may love all that Jesus loves…

The Marriage at Cana

For this mystery we refer to St John. We have no choice: the fourth Evangelist is the only one to relate this event. John 2,11 There He revealed His glory, and His disciples believed in Him. 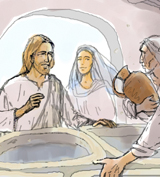 A short meditation on the event There was a party in Cana! A wedding banquet! Jesus’ mother was there. Jesus and His friends were also invited to the wedding. Suddenly Mary noticed that the wine was running out. Moved by the awkward position of the hosts, Mary turned to her son and said: « They have no more wine ». Her request was made tactfully and with discretion, but what confidence she shows in Him with this brief plea! Jesus had never shown anything of His tremendous power: however Mary knew His secret. Jesus replies to His mother with a visible refusal, to show that God alone decides the time. But He also wishes to teach us that God hears our prayers, and His words were so encouraging that the Holy Virgin turned to the servants, and said with confidence, the following words: « Do whatever He tells you ».

With the chapel at rue du Bac The first miracle performed by Jesus, the first public sign of His divine power was at Mary’s request. In the chapel, the Virgin Mary invites us to believe in the almighty power of her intercession: she has promised to pour graces on those who wear the medal with confidence. This Gospel of the Wedding at Cana is in the liturgy of the Mass for the feast of Our Lady of the Miraculous Medal on the 27th November.
Graces for now Like at Cana, Jesus is still present and active in our daily life. Let us turn with confidence to His Mother: « Where she is, there is everything » said St John Bosco.
Clausule: … and Jesus, who answered Mary in Cana, the fruit of thy womb…
Inspiration: To hope, associate action…

Proclamation of the Kingdom of God

Mark 1,15 The time has come: the Kingdom of God is near! Turn away from your sins and believe the Good News. 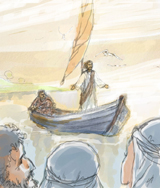 A short meditation on the event In these two short but striking sentences, there is a feeling of eternity. God had prepared Israel with ever clearer messages. The waiting is now over, that is what a man named Jesus announced, and his preaching raised great hope. This Good News for men, is the promise of justice and forgiveness in this world, it is the victory of good over evil, of life over death. Jesus announced to His people, that in order to welcome the awaited reign of God, they must be converted in their hearts and have faith.
With the chapel at rue du Bac The heart of St Vincent de Paul which is contained in a gold reliquary, reminds us of the forgiveness and free love of God. In his life as a priest, the discovery of spiritual misery is decisive for St Vincent. Recourse to the Sacrament of Reconciliation was the remedy that God suggested that he preach to the poor on the 25th January 1617, the feast of the conversion of St Paul. This event gave birth to one of the great works of his apostolate: The Congregation of the Mission.
Graces for now Let us be carried along by God’s generosity and turn to the Church, which despite all its weaknesses, accomplishes the reconciliation of man with God. The Virgin Mary, who is without sin, is only waiting for a word, a gesture, or a call for us to accept to receive the sacrament of forgiveness.
Clausule: …and Jesus who invites us to conversion, the fruit…
Inspiration:  The truth will set you free, said St John.

Mark 9,1 Jesus took with him Peter, James and John and led them up into a high mountain and was transfigured before them. 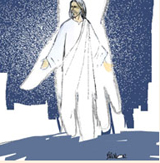 A short meditation on the event Jesus took with Him His three favoured disciples, Peter, James and John who had already been chosen to be with Him when He restored the life of Jairus’ daughter. He would also take them to Gethsemane and Mount Thabor. And there Jesus was transfigured. Not only His face, but His clothes too, became shining white. Then Elijah and Moses appeared next to Jesus, a sign of the perfect harmony and continuity between the Old and the New Testament. A thick luminous cloud of the Father, the Son and the Holy Spirit came down and rested on the disciples. As before on Mount Sinai, God spoke through the cloud. The voice did not speak to Jesus, like at His baptism, but to the disciples. The divinity of Jesus was confirmed: « This is my beloved Son ». It encouraged them to associate themselves with Jesus’ doctrine and His teachings: « Listen to Him ».
With the chapel at rue du Bac The chapel was solemnly blessed on 6th August 1815… the feast of the Transfiguration!
Graces for now The Transfiguration of Our Lord throws a bright light on our daily life. It demonstrates to us strongly that He truly is the Son of God, the Christ who reveals to us the transcendent destiny of our human nature. Let us ask Mary for the grace, to discover in the divinity of Jesus, grounds for assurance in our apostolate, and faith and hope during our ordeals.
Clausule: …and Jesus transfigured, the fruit of thy womb…
Inspiration: Like a loving Father, God prepares us for the trials of life through the graces that unite us strongly to Him.

A short meditation on the event The Eucharist, instituted by Christ the night before His Passion, is the great mystery of faith. With the bread, with words as powerful as they are simple, in a discreet and familiar ritual, Jesus gives Himself completely. Neither the bread nor the wine have changed in appearance, but by the word of the Son of God, they have become the body and blood of Christ. The consecration of the Chalice which is more developed than that of the bread, demonstrates more clearly the meaning of this new institution. This not only has the purpose of realizing the presence of Christ in the bread and wine, but it is also the nourishment of the faithful. It reminds us each time of the sacrifice of Christ on the Cross, it is a memorial of the mystery of Easter.
With the chapel at rue du Bac The sacrament of the Eucharist is at the heart of the spirituality of the three Saints of the chapel. Saint Louise is full of gratitude for this « loving invention that unites us to Him » that the purpose is to « sanctify souls by this perpetual presence which is not visible ».
Graces for now Let us pray that all our actions become « Eucharistic acts » like the Washing of the feet that St John puts into his Gospel instead of the Institution of the Eucharist. In the Eucharist we unite all our acts of offering to the offering of Jesus. Saint Vincent translates this with his favourite expression: « to give oneself to God ».
Clausule: …and Jesus, gentle and humble of heart, the fruit…
Inspiration: Mary, the first tabernacle in history…