Meditated on Wednesdays and Sundays

He is Risen! The Glorious Mysteries celebrate Christ’s triumph over the forces of darkness. St Matthew, one of the 12 Apostles, who was originally a ax collector, recounts in detail life in Palestine and he quotes extensively from the Old Testament to prove that Jesus is the promised Messiah, King of the Jews, He who fulfills the Scriptures. His theme is Jesus the man: so he starts his account with the genealogy of Jesus. With careful teaching, he offers a well organized catechisis divided into chapters: five long sermons and then the Passion. And he reveals the Church, with the knowledge that it is the real Israel, God’s people who will bear fruit. We relive here, the joy of those to whom Christ showed himself, and also Mary’s joy. To the glory which, through The Ascension, places Christ at the right of His Father, she herself will be associated with them through The Assumption. Finally, by her Crowning, she shines as Queen of the Angels and the Saints. At the centre of this glorious journey made by the Son and His Mother, Pentecost shows us the face of the Church as a family united to Mary, enlivened by the effusion of the Spirit and ready for the evangelistic mission. 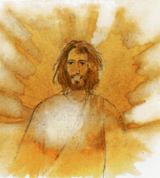 A short meditation on the event Jesus Christ’s Resurrection is the main point of the story. It is on this that Christianity is based. « He is risen! », this was the rallying cry of the disciples on Easter morning. They will seal this profession of faith with their blood. The eleven to whom Jesus showed Himself believe him to be alive. For forty days they can talk to Him, touch Him and eat in His presence. Amongst the evangelists, it is only Matthew who tried to evoke the Resurrection, soberly and discreetly from the testimony of the women to whom the angel appeared. But he holds back from describing the Resurrection itself, mystery which happened without any witnesses. The angel gave the women a message for the Apostles. Jesus himself would come to meet them and give them the same message.
With the chapel at rue du Bac Christ’s Resurrection is the main message of our Faith. We profess it in the Creed, as well as the Resurrection of the dead. In the chapel, the displaying for the veneration of the faithful of St Vincent’s heart, the relics of Saint Louise and the body of St Catherine found intact in 1933, reminds us of our own end to which we are destined. With St Paul, let’s say with hope « Oh Death, where is your victory? »
Graces for now So that hope, deep-seated in the paschal victory of the risen Christ, who reveals to us the triumph of life, motivates our passion in the fight for life.
Clausule :…and Jesus risen, the fruit of thy womb…
Inspiration: We are already saved. Our good will is enough. God is with us and we are with God, if we so wish.

Saint Luke, the only Apostle who referred to the Ascension of Jesus, tells it to us twice.. In his Gospel, the account is very brief – it is more detailed in the Acts of the Apostles. 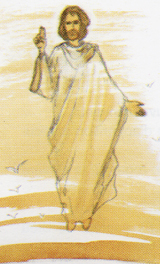 Luke 24,51 … »and it came to pass whilst he blessed them, he departed from them, and was carried up to heaven ».
A short meditation on the event On the 40th day after his Resurrection, Jesus appeared a last time to his disciples in the cenacle in Jerusalem. After having shared a meal with them, He arranged to meet them on the Mount of Olives. And so, Jesus retraced His steps of Holy Thursday. What a change from the Jesus of Gethsemane to the risen Jesus! The former giving way under the weight of such pain as to make him sweat blood – the latter, triumphant over death and hell, in radiant glory. The small group went past the garden of Gethsemane and climbed to the top of the Mount of Olives. There, Jesus said a solemn farewell and after a last blessing, rose majestically before His prostrate disciples and soon a luminous cloud hid Him from sight.
With the chapel at rue du Bac Jesus’ last gesture was a blessing. How wonderful! Today, Jesus continues to embrace us with the same care and love as during his mortal life. In the Chapel, the blessing of the medal reminds us of this. Through this sacred act, established by the Church, we are prepared to receive graces and be disposed to co-operate.
Graces for now JJesus rose up to heaven but He will come back among us. During each mass, after the consecration, let us fervently ask for the second « coming of Our Saviour, Jesus Christ ».
Clausule :…and Jesus who rose up to Heaven, the fruit…
Inspiration: the Cross is the beginning of the Ascension…

Act 2, 1-4 And there appeared to them parted tongues, as it were of fire; and it sat upon every one of them. And they were all filled with the Holy Ghost. 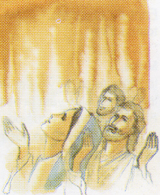 A short meditation on the event After the Ascension, the moment is crucial: Jesus Christ has disappeared, He is no longer visibly present. With Mary and the holy women, as told by the historian St Luke, the Apostles waited at the cenacle so that Jesus’ promise could be fulfilled. After a ten day retreat, the extraordinary wonder that the Apostles, the disciples and the Jews themselves regard as a miracle happened. A powerful gust of wind filled the Canaille, tongues of fire appeared and sat upon each of them. The Holy Spirit seized the Church of Christ. These ordinary and anxious men spoke in many languages and were no longer afraid. They proclaimed the divine nature of Jesus Christ in public places.
With the chapel at rue du Bac A beautiful mosaic reminds us of the enlightening memory of the coming of the Holy Ghost in Saint Louise de Marillac’s life. On Whit Sunday in 1623, in the church of Saint-Nicolas- des-Champs in Paris, Louise was consoled and made aware of her mission. All her life she kept a particular devotion for the third person of the Trinity.
Graces for now The Holy Ghost is at work in the Church and in our lives. Following the example of the Apostles, who were suddenly transformed by the visit of the Spirit of God, that we may also become tireless workers of His kingdom.
Clausule: and Jesus, filling you with the Holy Ghost, the fruit…
Inspiration: Like the Apostles, retreat with Mary so as to be available to the Holy Ghost.

There is no text in the Scriptures, that asserts explicitly the Assumption of Mary, implicitly contained in the Gospel and taught by the Church.

A short meditation on the event The last home of Mary was probably Ephesus. At the end of her earthly life there (the eastern tradition uses the word »dormition ») Mary was raised body and soul to the Glory of Heaven. Mary’s body did not decompose. This is what Pope Pius XII, on the 1st of November 1950, solemnly proclaimed in the dogma of the Assumption of Mary, her particular participation in Christ’s resurrection and anticipation of our own resurrection. This special privilege was accorded to Mary because of her divine motherhood. However, for mortal man, the resurrection will only happen on the last day of the world – for the Virgin Mary however, faultless and preserved from original sin, the glorification of her body was immediate.
With the chapel at rue du Bac It is here in 1830 that Catherine saw the Blessed Virgin « in the flesh » dressed in a silk dress the colour of dawn. From Mary, she received the mission to have a medal struck whose popularity prepared the way for the dogma of the Immaculate Conception, proclaimed in 1854.
Graces for now Mary is the first person to already share victory with the risen Christ, showing us in advance the glory which awaits us. Let us ask for the grace that we may not spend a single day without saying a fervent prayer or better still the Rosary to Mary, our Mother.
Clausule: …and Jesus giving us new life, the fruit of your…
Inspiration: Mary, Dawn of the new World…

The Crowning of the Virgin Mary 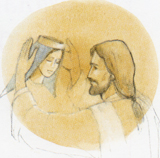 A short meditation on the event In 1954, for the centenary of the dogma of the Immaculate Conception, Pope Pius XII instituted on the 22nd August the liturgical feast of « The Holy Virgin Mary, Queen ». This is not something new that we are asked to believe. In fact, the royal dignity of Mary has always been stated in ancient documents of the Church and in liturgical books. The intention of the Pope was to offer Christians the opportunity to praise Mary whilst reviving the memory of this old tradition to which is also associated a significant iconography. Closer to home, the Vatican II Council reminds us that the Immaculate Virgin having been brought up with her body and soul to the glory of Heaven, was hailed by the Lord as the Queen of the Universe. Mary’s royalty should be understood in the context of the Gospel – as a service. Mary is a maternal Queen, because she is our Mother in the order of grace and an imploring Queen who intercedes on behalf of man.
With the chapel at rue du Bac With the celestial fresco where Mary reigns with simplicity, with the two hearts burning with Charity, with the Virgin with the Globe who holds earth lovingly to her heart, with the Virgin with the rays of light crowned and surrounded by stars, we contemplate Mary – perfect associate of the Sole Redeemer and the Sole Mediator.
Graces for now Mary is only waiting for one thing: that we ask her to fill our hearts with divine graces. The one she prefers is to change us from sinners to saints…
Clausule: ..and Jesus who crowns you, the fruit of…
Inspiration: to love and to make others love our Queen.