We are at the Mother House of the Daughters of Charity.  We are connected to their history as well.  The Company of the Daughters of Charity, founded in 1633, was the shared masterpiece of Saint Vincent and Saint Louise.  The Company has expanded throughout the world in fidelity to its charism.
The apparitions of the Virgin Mary to Catherine Labouré in 1830 and the diffusion of the Miraculous Medal were followed by an extraordinary growth in vocations, both to the Daughters of Charity and to the Congregation of the Mission.  Their members’ fervour became even stronger.  Over the years, the Company continued its service according to the spirit of the Founders: humility, simplicity and charity.

The Daughters of Charity are now found on all five continents.

The Company of the Daughters of Charity 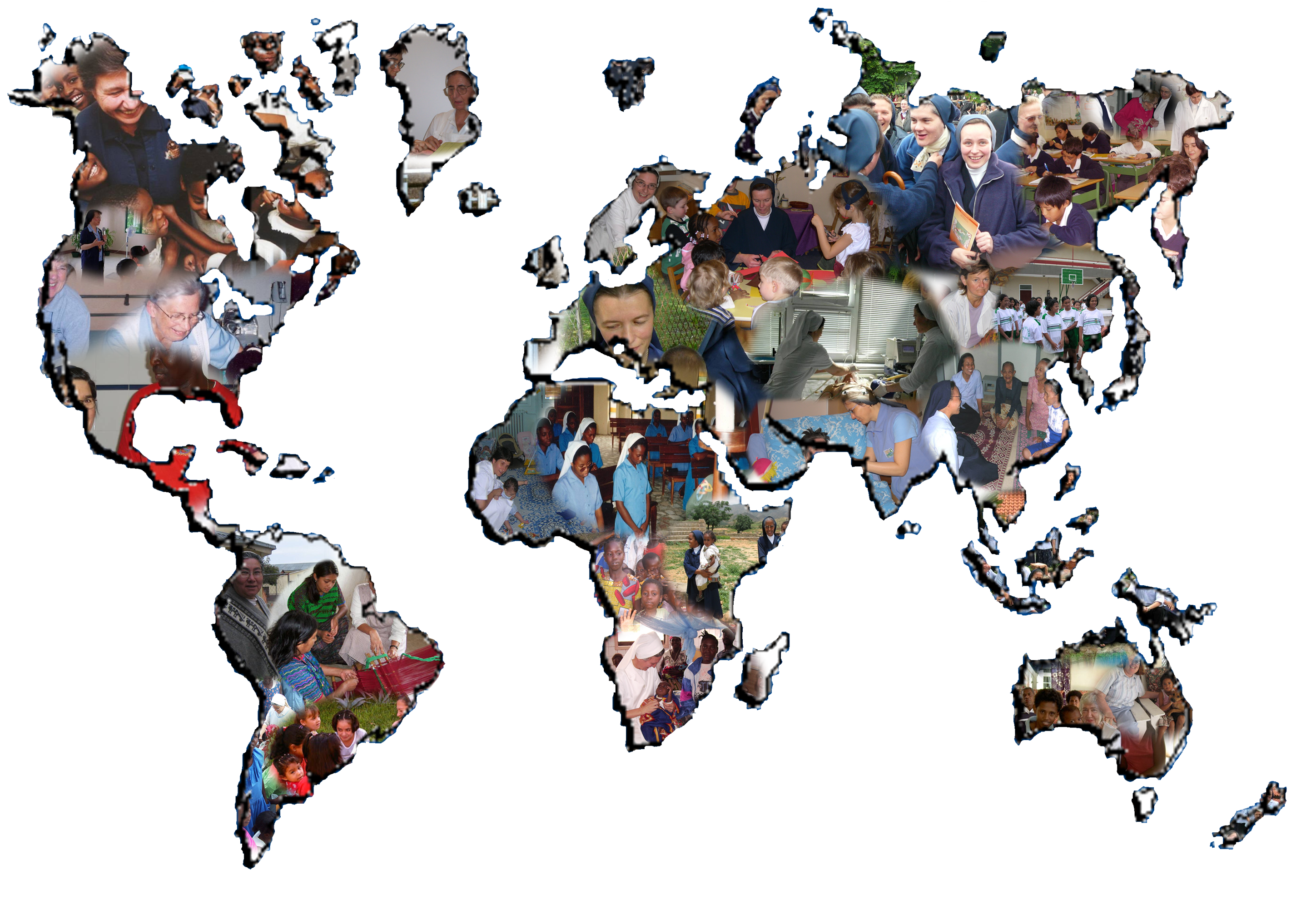 The Company, founded in France in the seventeenth century by Saint Vincent de Paul and Saint Louise de Marillac, is known in the Church as The Company of the Daughters of Charity of Saint Vincent de Paul, Servants of the Poor.
Deeply touched by suffering and poverty, Vincent de Paul sought the assistance of rich women and quickly realized that charity had to be organized.  A simple young woman from the country, named Marguerite Naseau, presented herself to perform the menial tasks which the ladies of the confraternities were unable to assume.  Inspired by true evangelical love, she became the servant of the most abandoned.  Her example was contagious.  It was in this way that, imperceptibly, in the manner of things divine, the Company of the Daughters of Charity was born.  As early as 1630, Vincent de Paul entrusted to Louise de Marillac the first Sisters, who were devoting themselves to the work of the various confraternities.

On 29 November 1633, they gathered around Louise de Marillac to live their ideal under her guidance in community.  At first they nursed the sick poor in their homes, in the towns and villages; as needs became known, they cared for the sick in hospitals, little girls in need of instruction, foundlings, galley convicts, wounded soldiers, refugees, the aged, persons with mental illness, and others. 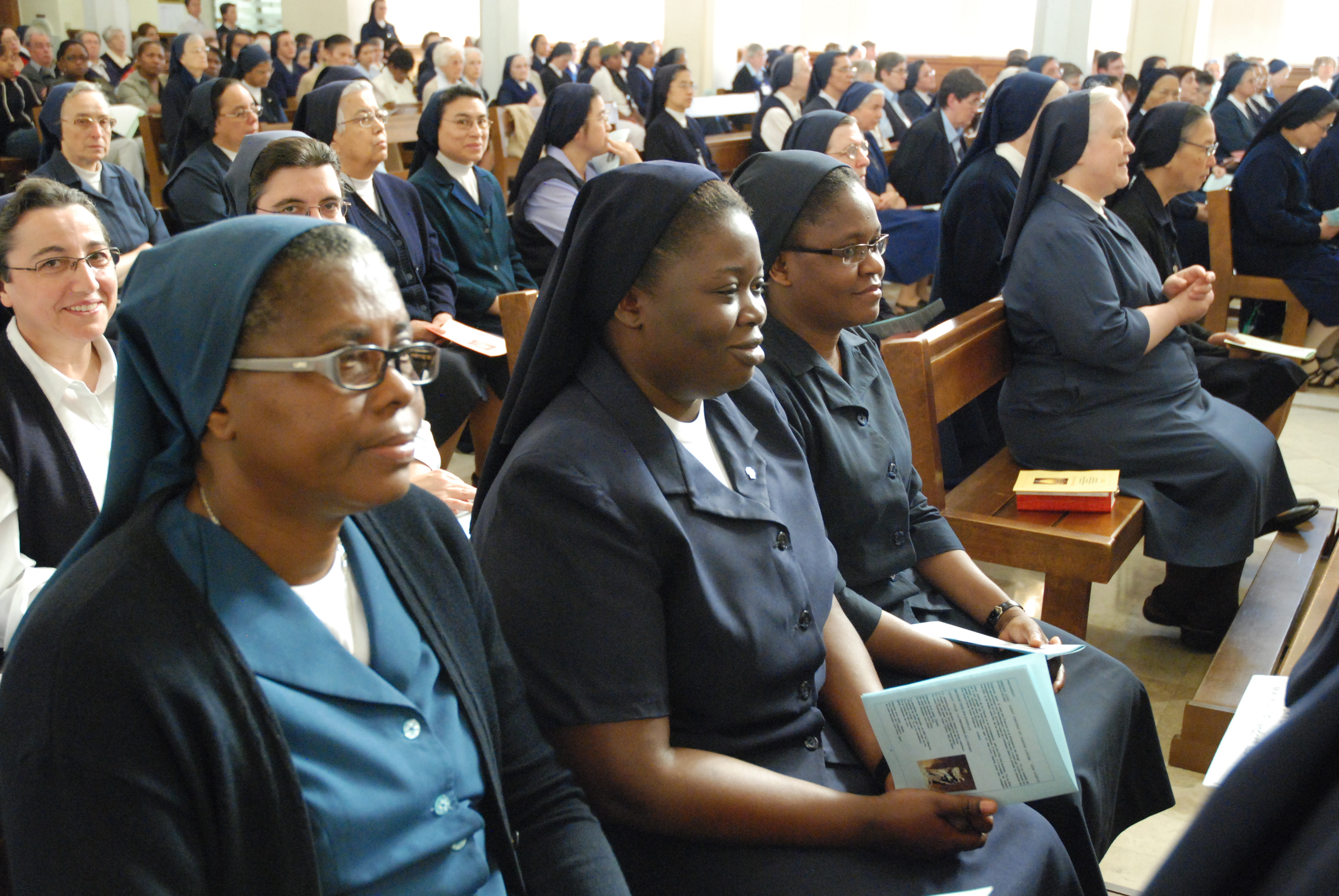 Today, the international Company is present in more than 90 countries and on every continent.
The Daughters of Charity, totally given to God in community, dedicate their lives to caring for the most abandoned, accompanying them, helping them get back on their feet and drawing near to each individual.
Motivated by their motto, “The Charity of Jesus crucified urges us”, their ministries include wide-ranging activities in the humanitarian and social works, while also working for justice, peace and solidarity.
Just as societies change and grow, so do the needs of those who live in them.  Therefore, the services of the Daughters of Charity are continually being adapted and changed in response. 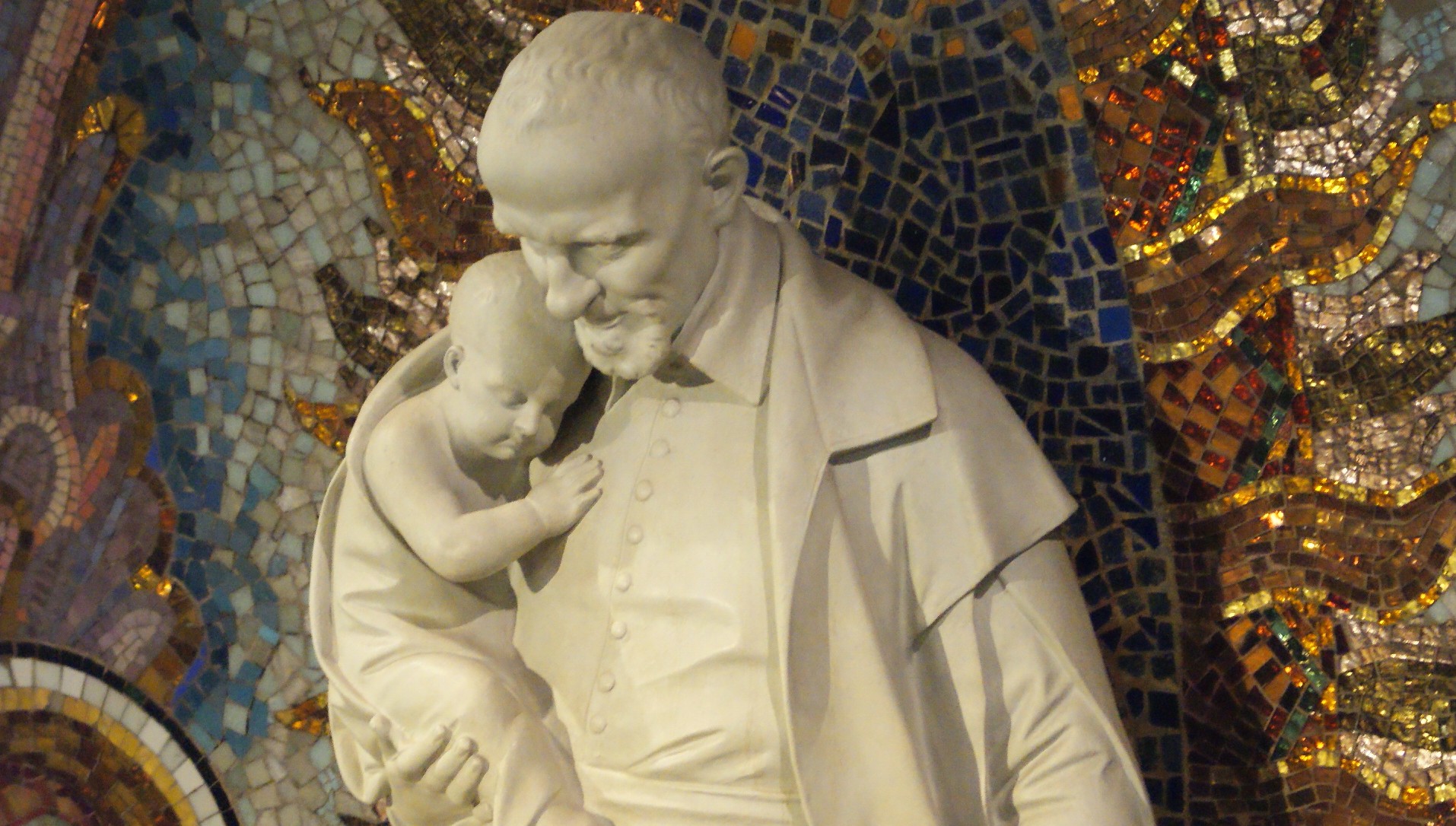 At 140 rue du Bac, we might be surprised to see St. Vincent de Paul welcoming us. But what could be more appropriate than to honour our predecessors, here at the Mother House of the Company founded in 1633 by St. Vincent and St. Louise.
What’s more, we know the saints are very active in heaven.  St. Vincent played a role in the vocation of St. Catherine by means of a mysterious dream. In addition, the solemn translation of the relics of St. Vincent de Paul took place on April 25, 1830, just a few days after St. Catherine’s arrival at the Seminary in Paris. What a happiness for her to be able to accompany the priest who was so instrumental in her vocation!  Finally, St. Vincent showed his heart to St. Catherine while she was praying in the chapel of rue du Bac. She saw his heart three days in succession, each day in a different colour, making known to her that her mission was close at hand.
The great day arrived: it was the eve of the feast of St. Vincent, July 18, 1830, and Catherine listened to a talk given by a Sister on the love St. Vincent had for the Immaculate Virgin Mary. The Sister’s words aroused in Catherine the ardent desire to see Our Lady.
Before going to sleep that night, Catherine implored St. Vincent, whom she so admired, to intercede for her so that her wish might be granted. Following this bold prayer, Catherine fell asleep. An angel awakened her…

A great love for the Virgin Mary filled Saint Louise:
“I am entirely yours, most Holy Virgin, that I may more perfectly belong to God.”
In spite of controversies that existed in the Church on the matter, Louise was convinced of the Immaculate Conception of the Mother of God and wanted it to be recognized and celebrated, for The Blessed Virgin “is the only pure creature who has always found favour in the eyes of God.” The Daughters of Charity add a short prayer at the end of each decade when they pray the rosary, part of which appears in gold letters in the dome of the Chapel:
“Most holy Virgin, I believe and confess your holy and Immaculate Conception.”
During a pilgrimage to Chartres in 1644, Saint Louise consecrated the Company of the Daughters of Charity to the Blessed Virgin.
The final words of her Spiritual Testament express her Marian devotion:
“Take good care of the service of the poor. Above all, live together in great union and cordiality, loving one another in imitation of the union and life of Our Lord. Pray earnestly to the Blessed Virgin, that she may be your only Mother.”

Catherine Labouré was born on May 2, 1806, in a town in Bourgogne, France, called Fain-les-Moutiers. She was the eighth of ten children born to Madeleine and Pierre Labouré, who owned a farm. The death of Madeleine at age 46 plunged the family into mourning. Catherine, in tears, climbed on a chair to reach the statue of the Blessed Virgin and kissed it, saying: “Now you will be my mother.”
At age twenty-four, Catherine, after overcoming many obstacles, entered the Seminary (novitiate) at the Mother House of the Daughters of Charity, on rue du Bac in Paris. It was here in the Chapel that the Blessed Virgin appeared to her several months later, the first time on the night of July 18-19, 1830, to tell her about a mission to be confided to her, the second time the following November 27, to show Catherine the medal that she was asked to have made.
The following year, having completed her Seminary, Sister Catherine was sent to Reuilly, at that time a very poor neighbourhood in the southeast of Paris. She would serve elderly men there until the end of her life, keeping her secret to herself, while the medal miraculously spread throughout the world. 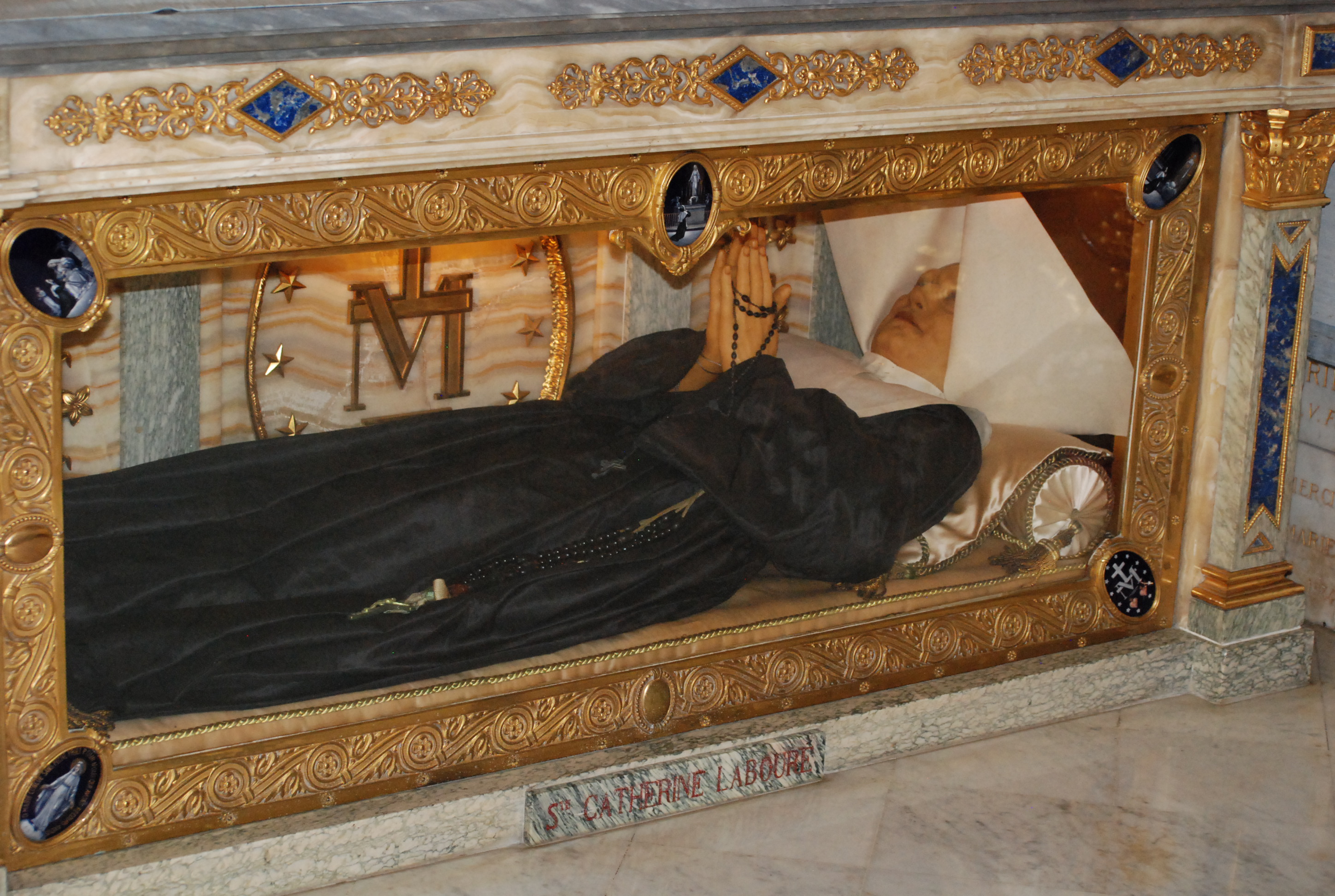 Catherine Labouré died in peace on December 31, 1876: “I am going to heaven… to see Our Lord, His Mother and Saint Vincent.”

In 1933, at the time of her beatification, the vault where she was buried at the chapel in Reuilly was opened. The body of Catherine was found to be intact and was transferred to the Chapel at rue du Bac and placed under the altar of Our Lady of the Globe.