Meditated on Tuesdays and Fridays

Here begins the narrative of the Passion of Christ. The eighteen terrible hours endured by Jesus before his death show us the deep love God has for us all. They are the source of our salvation. The Passion according to St John, that the roman liturgy proclaims be read on Good Friday, is the most moving. Not only was John a narrator without equal, but he was also an eyewitness. A disciple of the first and the last hour, he wrote his memoirs in Ephesus at the end of the first century.
His Gospel begins « in Heaven », close to God with an impressive prologue, hence his symbol: the eagle. His narration is powerfully evocative. It abounds with images of the creation: light, water, wind and everyday realities of life: the vine, bread and the shepherd. John, witness and friend, leaves us with a living image of His Lord.
This meditation opens with The Agony in the Garden where Christ spent a particularly agonising moment. How much it will cost Him to follow His Father is evident in the following mysteries, The Scourging at the Pillar, The Crowning with Thorns, The Carrying of the Cross, The Crucifixion and the Death of Jesus. These mysteries reveal the love of God and the very meaning of man and bring the believer to relive the death of Jesus by standing at the foot of the cross with Mary.

The Agony in the Garden

The 4th Gospel, which implies knowledge of Jesus’ life, does not speak of the Agony (the word in Greek, means battle) of Jesus at the Mount of Olives. We look to St Mark who gives a poignant account. 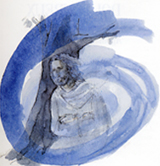 Mark 14,34 My soul is sorrowful even unto death. Stay you here and Watch.
A short meditation on the event In the garden called Gethsemane, Jesus took the three disciples who were present with Him at the Transfiguration: Peter, James and John. A mortal anguish took hold of Him at the thought of the torture that He must go through and an unfathomable grief: the sadness of a betrayed friend, of an abandoned Master, and of a rejected Messiah; the horror of sin and infamies committed by humanity; sorrow for the ingratitude that people repayed Him for His love and for the loss of the souls who reject Him. During this ordeal, Jesus turned towards His Father with humility and confidence. He stepped aside and prayed and then returned to the three Apostles who had fallen asleep. He gave Peter a sad reproach and urged him to « Keep watch and pray… » For a second, and then a third time, Jesus stepped aside to pray. When, finally, He rejoins His disciples, He is ready for the battle. His persistent praying was answered. Fortified by grace, Jesus accepted the chalice of the Passion.
With the chapel at rue du Bac The Blessed Virgin appeared to Catherine standing on a half-globe of the earth, her feet crushing a snake, symbol of the Devil. In our spiritual battle, we are not alone. Mary fights for us and with us, if we ask her.
Graces for now Peter loves Jesus. He believes himself to be ready for any sacrifice. But at a crucial moment, when Jesus needs him, he falls asleep… May prayer become the most important act in our life…
Clausule: and Jesus, who was not comforted, the fruit…
Inspiration: To pray with Jesus at the hour of His greatest ordeal, is the first kindness that we can show Him.

The Scourging at the Pillar 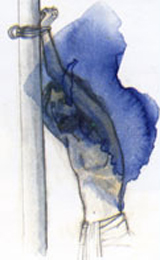 A short meditation on the event Jesus was scourged. This is a historical fact that was related by the four Evangelists as a significant episode of His Passion. After Jesus had appeared before the priest Caiphus, He was brought to Pilate who submitted Jesus to the torturer even before he pronounced the death sentence. In fact, embarrased by the situation, he proposed an amnesty, but a famous prisoner Barrabas was preferred by the Jews. Pilate still hoped to apease Jesus’ enemies by sending Him to the agony of the scourging. The roman soldiers stripped Jesus of His clothes, tied Him to a pillar and lashed Him with their whips made out of two or three lashes at the end of which were tied a sheep’s knucklebone or two metal balls. The Jews limited the torture to 49 strokes. The roman beating was especially brutal. On the shroud of Turin experts have found approximately 120 marks.
With the chapel at rue du Bac Amongst the victims of human brutality, there are those who are tortured through loyalty to their faith. Ordained a priest in this chapel, 1826, Saint Jean-Gabriel Perboyre, suffered martyrdom in China in 1840 in conditions very similar to the Passion of Christ. His remains are at the Chapel of St Vincent de Paul.
Graces for now Open your eyes, look at the uncaring and unconcerned crowd before the horrible spectacle of the horrors inflicted on Jesus. Look at the frenzied torturors whip him with unbelievable cruelty… Let us ask for the grace to have empathy for the suffering of others and to unite ourselves to Jesus, like Mary, in our own suffering.
Clausule: …and Jesus scourged, the fruit of thy womb…
Inspiration: How can we forget that this blood was shed for us?

The Crowning with Thorns 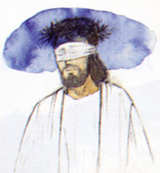 A short meditation on the event When the torturors were tired of hitting Jesus, they untied Him, threw a purple coat on His bloodied shoulders and forced a crown of long thorns which cut into His head and forehead. They sniggered and bowed down before Him to make fun of His royal claims, then slapped Him across the face. The royalty of Christ, King of heaven and earth was scoffed at, but despite this desperate humiliation, the crowning with thorns foreshadows a certain triumph of Christ the King. The crown of thorns, object of the veneration of Christians, was placed in the Cathedral of Paris in a grand ceremony by Saint Louis, King of France. He had the Sainte Chapelle built in 1246 in order to conserve it. The crown of thorns is venerated at Notre Dame every first Friday of the month and on Fridays in Lent.
With the chapel at rue du Bac All through her training, Sister Catherine saw, during the mass, the presence of Christ in the Eucharist. On the 6th June 1830, on the feast of the Holy Trinity: « Our Lord appeared like a King, with a cross on His chest… » This vision shows the Eucharistic royalty of Christ. From His tabernacle, Jesus-Host reigns over the Universe: He is the God all powerful, the Master before whom we all bow to in Heaven, Earth and the Underworld.
Graces for now That the Virgin Mary may help us to recognize in all suffering people the Saintly Face crowned with thorns.
Clausule: … and Jesus, crowned with thorns, the fruit of thy womb…
Inspiration: Like St Vincent, let us say often with love: « Oh Saviour! »

The Carrying of the Cross

John 19,17 And bearing his own cross, he went forth to that place which is called Calvary, but in hebrew Golgotha. 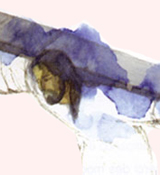 A short meditation on the event According to the rules, the convicted person must carry the heavy cross beam, to which he would be nailed or attached, right up to the place where he would be executed. In this ancient quarry, outside the walls of Jerusalem, there was a rock about 4 metres high. Three stakes stood out on the hillock called Golgotha. Little by little, the memory of the path along which the gloomy procession proceeded has become increasingly the object of devotion of Christians. In the 18th century the 14 stations of the cross were spread under the influence of Saint Leonard de Port-Maurice who had them set up in 572 places, one of which was in the Coliseum in Rome. Every year, the Pope prays the stations of the cross there.
With the chapel at rue du Bac The 14 pictures in Carrara marble in the chapel date from 1930, the centenary of the apparitions. As always, nine stations illustrate scenes reported by the Evangelists while the other five are events handed down through tradition. To pray the stations of the cross is to penetrate the depths of God’s love and to discover the source of our eternal salvation. It is also how to learn to carry each other’s burdens.
Graces for now Those who applauded Jesus’ miracles, the friends of happier days have disappeared. Only a small group of women remained faithful and followed Him. Also, the one Jesus loved: St John. May we also be amongst the ones who console Jesus through our faithfulness and our love.
Clausule: ..and Jesus, who carries the cross, the fruit of thy womb…
Inspiration: All these poor people who suffer, that is where my burden and my pain lie, said Saint Vincent.

Crucifixion and Death of Jesus 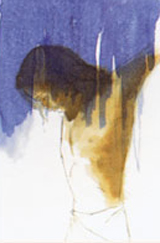 A short meditation on the event It was three o’clock in the afternoon. At this tragic hour, the Son of God has died, executed by men. It is without resistance that the Master of Heaven and Earth bore the agony of the crucifixion. How torn was the heart of His mother, who followed him up to Calvary and stood at the foot of the Cross! Eyewitness to the death of Jesus, John wrote down his account. Four women were also close to the cross. To this group, Jesus declared his supreme desire: he entrusted His mother to His beloved disciple, and through him His church and the whole of humanity; and on earth, John would be the one to shelter, nourish and love the Mother of Jesus after the death of her Son. After His death, a last revelation of Jesus’ love was shown by a final act charged with symbolism: His heart was pierced with a lance from which flowed blood and water.
With the chapel at rue du Bac At the foot of the cross, Mary became Mother of all men. The gift of the medal in our chapel is the gift of a mother who protects and guides her children and leads them to God. And God chose a chapel dedicated to… the Sacred Heart!
Graces for now Let us ask to contemplate Christ crucified, perfection of love, in the Mass, which continually repeats the sacrifice of the cross. The altar in our churches is a new Calvary.
Clausule: …and Jesus, who was crucified and died on the cross, the fruit…
Inspiration: It would seem that Jesus is abandoned by His Father, and Mary is abandoned by her Son. When we are overwhelmed by an ordeal, let us look to Jesus, let us look to Mary.