Luke 1,38 And Mary said: « Behold the handmaid of the Lord: be it done to me according to thy word ». 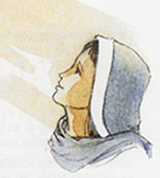 A short meditation on the event Mary knew that the Angel Gabriel was the messenger of God as she was familiar with the Holy Scriptures. She discovered through this message the extraordinary favour that was being asked of her: she is full of grace, without sin, immaculate. Mary, who understood God’s greatness was deeply moved. The Angel announced to her that she would conceive and give birth to the Son of God, the Almighty. Mary needs to be enlightened by what was to happen in her. The Angel told her « The Holy Spirit shall come upon thee and the power of the Most High shall overshadow thee », revealing the hidden meaning of Isaiah’s prophecy that a child would be born of a virgin. « Nothing is impossible for God ». Mary immediately gave her consent.

With the chapel at rue du Bac The apparition of the Holy Virgin to St Catherine Labouré took place in a spiritual atmosphere similar to the Annunciation: the tenderness of a personal meeting, full of intimacy, reverence and silence. At the announcement of her mission, Catherine’s response was the same as Mary’s, absolute devotion to God’s will. Like mother, like daughter!
Graces for now God respects those he has created. He guides them with love. Let us ask for the grace of the Annunciation to descend into our hearts, transforming the fear of God into filial trust and our rejection of God into a generous acceptance of His will.
Clausule: …and Jesus incarnate, the fruit of thy womb…
Inspiration: That each Christian imitate Mary’s total devotion to God, said John Paul II.

Luke 1,45 And blessed art thou that has believed, because those things shall be accomplished that were spoken to thee by the Lord. 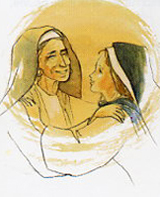 A short meditation on the event We come to know one another through acts more than words. In her dialogue with the Angel, Mary revealed her humility, her honesty and her generosity. Here, Mary’s scrupulous obedience to God has been clearly demonstrated by the fact that she left to visit her cousin, Elizabeth, as soon as she got the brief message from the Angel about her – she made a quick decision full of kindness. When Elizabeth heard Mary’s greeting she was filled with the Holy Spirit. Without receiving any news, Elizabeth showed miraculous knowledge of the Incarnation of the Word. Her greeting to Mary was therefore full of respect. She was the first, here on earth, to give her the magnificent title that she would forever be known by: she called her the Mother of her Lord. In response to the explosion of happiness that burst out from Elizabeth’s words, Mary cried out from the deepest part of her heart « My soul doth magnify the Lord… »

With the chapel at rue du Bac Feast of faith and joy, the Visitation is also a fraternal service. As a result, Mary has inspired more than one Christian! After the meeting with the Holy Virgin, St Catherine worked in the hospice of Reuilly for the elderly and the poor for forty-six years, in total sacrifice…
Graces for now Through Mary, God fills a whole family with graces and blessings. Let’s ask that God live in us so that we may give Him to others, like Mary did.
Clausule: … and Jesus Lord, the fruit of thy womb…
Inspiration: Like Elisabeth, let’s open the door to Mary. When the Holy Spirit sees Mary in a soul, he rushes in…

Luke 2,7 And she brought forth her firstborn son and wrapped him up in swaddling clothes and laid him in a manger: because there was no room for them in the Inn. 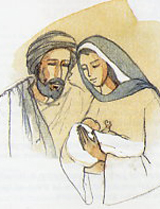 A short meditation on the event Poverty has always been looked down upon by most people… and yet Jesus chose it for His parents and Himself. Are these the surroundings we imagine for a divine birth? Where is the splendour, the comfort, the luxury that the great of this world like to surround themselves with? The first to adore Christ were Mary and Joseph, united in fervour by their wonderful secret. The first visitors were shepherds and the religious and social outcasts of the time. Despite the destitution of the crib, there reigned an atmosphere of jubilation. The birth of the Saviour of the world was sung by the angels and announced to the shepherds as a great joy: « Glory to God in the Highest ».
With the chapel at rue du Bac Christmas, the feast of the birth of the Son of God in Bethlehem is also the feast of the spiritual birth of Christ in the hearts of believers all over the world and for all time. With the Miraculous Medal God gives birth to, and increases, faith on all continents: every day is Christmas!
Graces for now God made Himself like us to show us how we should live. Because He became incarnate as a child and born into poverty, let us ask for the grace that we may detach ourselves from wealth and social status.
Clausule: …and Jesus born in Bethlehem, the fruit of thy womb…
Inspiration: It is not fear that God wants in our hearts, but love.

The Presentation of Jesus in the Temple

Luke 2,28-30 Simeon took the child in his arms and gave thanks to God: « Now Lord, you have kept your promise, and you may let your servant go in peace. With my own eyes I have seen your salvation… ». 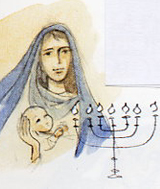 A short meditation on the event Humbly, and in order to keep God’s secret, Mary and Joseph dedicated their first-born child to God, in accordance with the ritual prescribed by Moses. They also made the offering of the poor: two white doves. What a joyous feeling in the hearts of the parents upon hearing Simeon’s words! Their secret was confirmed by the prophecy which named Jesus as Saviour of the World, the Light of Nations and the Glory of Israel. However, Simeon’s farewell to the Holy Family left them with painful premonitions. He said to Mary, « This child is chosen by God for the destruction and the salvation of many… and sorrow, like a sharp sword, will pierce your own heart ». An old widowed lady, Anne, when seeing the child recognized him as the Messiah.
With the chapel at rue du Bac Here is Christ, the suffering Servant of God and Mary, and the mother with her own heart pierced: the reverse side of the medal speaks the same language. With the two hearts, the one crowned with thorns, the other pierced with a sword, the letter M interlaced, with the Cross on top of it, the whole together tell of the mystery of the life of Christ and His mother, the mystery of the Church and humanity, and the mystery of all human life. There is no joy without darkness on this earth…
Graces for now It is in Mary’s arms that the Saviour was found by Simeon. Let us ask Mary to give us Jesus.
Clausule: … and Jesus presented in the Temple, the fruit of thy womb…
Inspiration: Simeon, Anne… a man, a lady… two lay people… two prophets…

The Finding of Jesus in the Temple

Luke 2,48 My son, why have you done this to us? Your father and I have been terribly worried trying to find you! 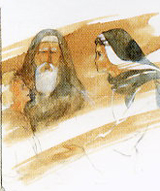 A short meditation on the event In the Jewish faith, the age of 12 marks the spiritual coming of age. Jesus began this new period of His life emphasizing, by some perplexing behaviour, that the rule of life of the believer, even at this young age, was to dedicate oneself seriously to the service of God. This better allows us to understand how Mary was living the mystery of her son through her faith. How anguished His parents were! His disappearance in Jerusalem for three days, reminds us of the Passion and the death of Jesus in the same city. Jesus thus prepares His mother for His last Passover by allowing her to reflect more deeply on the demands of her divine motherhood. The drama was resolved with joy and thanksgiving: Jesus was lost and then found…
With the chapel at rue du Bac During these three days, Mary suffered from this separation from Jesus. Catherine also, during five years, lived an exile. She came up against the opposition of her father who finally, because of her relentlessness, accepted her vocation. With great joy she entered the novitiate at the rue du Bac on the 21st April, 1830.
Graces for now Mary and Joseph searched for Jesus with eagerness, faithfulness and through prayer, until they found Him. Let us ask for the grace of perserverance
Clausule: ..and Jesus, lost and found, the fruit of thy womb…
Inspiration: Happy is the Virgin Mary, carefully keeping the word of God and meditating on it in her heart!